Once upon a Time in Iowa is my upcoming young adult historical fiction. It all started as a little harmless genealogy research and it is blossoming into something spectacular. I found my ancestors buried amongst the censuses and other documents. I hunted them down in the Library of Congress’ Chronicling America collection of newspapers. Still, I wanted more.

Maybe I found just enough to entice me, or maybe it was just how little I did find, but something drew me to Jesse and Mary. I decided to give them a story. Still, I didn’t know what that story should be. A romance felt too obvious. Besides, I don’t want to be that intimate with my third great grandparents.

In order to decide what their story was, I needed to get to know them. I focused my research on finding them. I found their birthdays. I found each and every census either of them appears in. I learned who their family was. I discovered all of the places that they had lived. I scoured over old newspapers for tidbits of their social lives.

It payed off. I learned all that I could about each of them. I collected the names of their family members, and, then, I followed their trails as far as I could.

Now that I had my list of family members, I started to research each of them. Where were they? Who did they grow up to be? Where were they in 1870 — the most recent census taken before 1871 when “Once Upon a Time in Iowa” is set — and what were they doing?

Mary will be my star. My main character. My story begins around her eighteenth birthday. It’s the summer of 1871. Mary’s story will be a story about family. She’s the responsible one. She takes care of everyone and the household. She has chores to tend to and siblings to keep an eye on. She doesn’t have time to be whiling away her summer, daydreaming. She is a social creature and a natural hostess. She will meet Jesse, but I’m not certain how much of the story will end up being their’s.

Sometimes he was Meridian, other times he was Perry, still others he referred to himself as M. P. I haven’t decided who he will be in my story, though I am leaning most towards Meridian. I like its uniqueness. Meridian was Mary’s oldest brother. He married Mary Ellen McFadden in 1870. She was part of a rather large family. I was relieved to discover most of them had moved on to Nebraska by the time she married Meridian. I expect him to be the stiff, no nonsense older brother. He filled the father role for his younger siblings after they’d lost him. 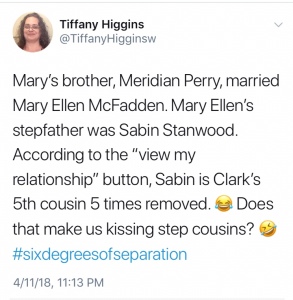 Lewis is going to be Mary’s confidant. They are thick as thieves. Lewis is less than a year older than Mary — on my Twitter post, I accidentally reversed that — and is most comfortably himself when he is with her. With Meridian — now married and starting his new life, preparing to join his in-laws in Nebraska — and the second oldest, William, off working the railroad, the farm and all its responsibilities land in his lap. There’s a huge difference between working the farm and running the farm. 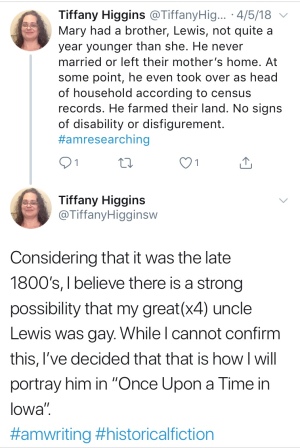 She’s the baby sister. She’s only 9 years old. She will attempt to follow Mary everywhere, as baby sisters often do. Her youth and perpetually happy nature provide a warm ray of sunshine in the family. At 9 years old, there’s still plenty of mischief left to get into.

He’s fifteen. He works the farm because it is expected of him, but his love is the horses. He can usually be found amongst the grazing horses, hiding in the stables, or off to the saddlery learning every thing he can.

I know – another Mary? It was such a common name back then. This Mary will be most often referred to as Momma. She is the matriarch of the family, and, as a widow, she has the final say in most of the family decisions. As mothers often do, she will likely embody strength and tenderness.

He is twenty four years old and has been working for the railroad since his discharge from the union army after the end of the Civil War. He was living in Ohio with his sister, Mary, when he heard about the railroad job in Iowa. That’s what brought him to town.

There were many notable characters in early 1870’s Iowa. My research has introduced me to quite the cast. Each of these members of Harrison county history will be auditioning for a chance to appear in Once Upon a Time in Iowa. Perhaps a trip to town will include a chance to listen to one of Old Uncle Dan Brown’s stories. Or, maybe somebody will require a meeting with Dr. W. F. Clark, who opened the county’s first bank in Magnolia in 1871. Or any of the countless other people I’ve met – or will meet – during my research.

Getting to know everybody

That’s the tricky part. I could just create everybody to be whoever I want them to be. The records are gone. Nobody will know how wrong I am. It is, after all, a work of fiction at its very core. But, this is my family, my ancestors, my history. I want to honor who they were.

I decided not to stop my research at 1871 when my story takes place, or even 1872 when Jesse and Mary married. I followed each of the main characters as far as I could find them. Most of them, that actually means to the grave.

Mostly, I was looking for that one little clue on the census — occupation — because it can reveal a lot about who they are. Questions like who served in the military, who married, how many kids did they have can give me introspective into the personality traits that might have been developed in early years.

Getting to know what to say

Now that I’ve spent my time getting to know who my cast of characters is set to become, it is time to decide who they already were. It is now time to take each character and put them through the barrage of questions that will help me turn them into the people they once were — or the people they will be for me. I’m tweaking my questionnaire to fit the time period — are you addicted to social media? seems like a silly question to ask an 1871 character.

Even with all the research still to do, some days my cast just won’t sit quietly and wait until I’m ready. On those days, I sit down and write. Chapters are coming out as only bare bones. Not much more than writing a synopsis or a very detailed outline. Some of the dialogue has already taken place, even though it may belong at the end of the book.

This is a completely new and different writing experience for me. Admittedly, it is the first time I am writing a novel that depends so heavily on researching the past. I’ve also never had one that comes to me in bits from all over. Steady, easy flow has always been my writing style — I discuss writing my first novel in I love you just the way you are.

This is somehow more fun. The whirlwind writing, delving into the past and pulling out long forgotten moments, and getting to know my ancestors all at once creates a hurricane of emotion that seems to act as a catalyst for my writing.

Once Upon a Time in Iowa is a work in progress