I hope everyone had a great Halloween. The daughter managed to bag herself about twenty-five pounds of candy!! This is with the fact that we got started about a half hour late. The daughter went as Link (from the Zelda Saga), the husband had his face painted up like a skeleton, and mine was done up like a sugar skull using temporary tattoos. Of course, we completely forgot to take pictures! 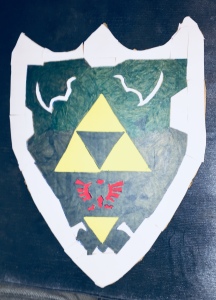 The charge for checking the candy after Halloween is enough candy for me to bake Monster Cookies. She unwrapped a variety of candies and mixed them together in a freezer bag. They are in the freezer awaiting the hammer. They will then go into a batch of cookie dough and I’ll bake them up into cookies that will disappear as quickly as the ghosts and goblins of Halloween.

We’ve come back round to Monday

I must admit, I’m not feeling so Mondayish today. It still feels like a Monday, it just feels like a Monday I have been waiting forever for. In a way, I sort of have. Sometime back in September, my husband was moved to days. Being the ever dutiful wife, I switched shifts with him.

Mondays were the worst {A Case of the Mondays}. I really don’t understand why humankind has subjected themselves to a clock that starts earlier than is natural. I love our afternoon shift. Admittedly, it took a little getting used to serving dinner after midnight, but it works for us. We are all very much night owls.

I didn’t. I didn’t read at all. I didn’t write, either. Admittedly, I did spend some time in my head with the cast of Once Upon a Time in Iowa. I can’t help that. My mind gets to wandering, and, next thing I know, I’m lost in my own thoughts working out plot lines and throwing new problems at my favorite characters.

With the husband on days and the son staying on afternoons, there was always hustle and bustle in the house. Conversations and video games and the sound of apps abundant. There was music playing, television watching, and movie nights.

Now, it’s just the daughter and me. At twelve, she spends more time hiding in her bedroom than out here with boring, old Mom. I’ve got my music playing — mostly a collection of all that I loved growing up — but there’s nobody yelling over it.

It’s just so boringly Monday. I can hear the laundry tumbling in the dryer. The next load waits in the washer, having finished some time ago. There’s a pork tenderloin thawing on the counter, waiting for me to decide what it will become by the time it makes it to my family’s plates. The park is deserted. No kids ever seem to come out to play after school on Mondays. Perhaps they have too much work to do to make up for having two days off?

Yup. It’s back to Mondays as usual, and I couldn’t be happier. You can almost hear my excitement as it echoes through the quiet house. Maybe it’s just muffled by the music I’m playing a little louder than I should in an attempt to drown out the silence I’d forgotten about.